Training Builder is a visual tool that allows VR experience designer to control the logic in the VR experience without the need to write any code.

Training Builder allows the user to links Event with Response(s)

An Event is fired when something happens in the experience, for example when the user clicks on a specific object, or when an object collides with another object. A Response is the reaction the VR experience should do when an Event takes place.

For example when the user clicks on Globe Object (Earth_geo) Scene Node in the Node Triggered Event, it starts the rotation sequence (Play Sequence) Response, as shown in the following image 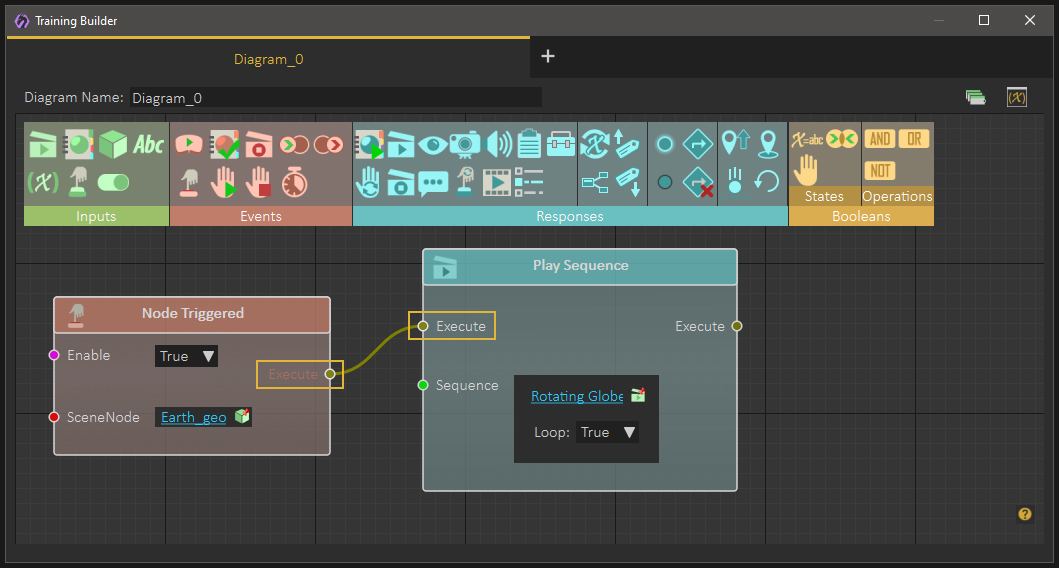 Supported variables are of the following types:

String Variable; Stores object names, message data, ..etc
Number Variable; Supports both integer and float numbers. Can be used for calculating , and storing values
Time Variable; can save the time at any stage of the VR experience

Initial value can be set to any string in the variable editor in training builder.
When used in Change Variable response, string should be surrounded in single quotations (' ')

The user can control its size, and place, so it can be aligned on a wall in the scene or on a monitor, user selects which variable to view, color of the text, and prefix text.

Having multiple Variable Writers belonging to the same group make them have the same font size.

Variables can be created and edited by clicking the Edit Variables button ay the top right part of the Training Builder. It allows the user to view/delete/change initial values of existing variables, or create new variables.

Clicking '+' at the top right corner of the Edit Variables and Initial Values dialog will add a new variable. The user can click to change the name of the variable, select its type from the combo box, and set its initial value. 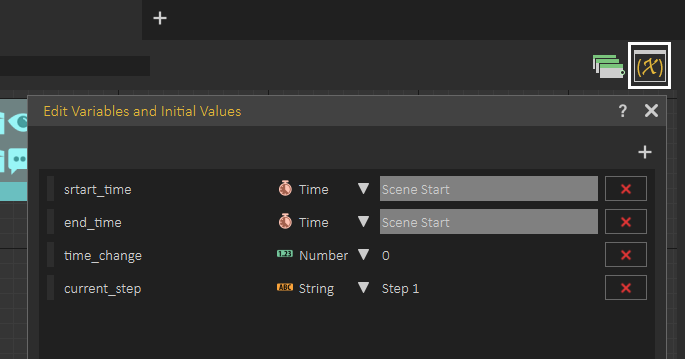 Inputs are entities used as triggers for actions in the Training Builder diagram. For example if multiple nodes in the diagram use a Scene Node, it can be used as input and be connected to multiple blocks. Updating the input once will be reflected to all blocks using this input.

Events are triggered when something happens in the VR experience.

The following image shows how to use Scene Start Event, which takes place as soon as the VR experience starts, to play Sound Action Response. 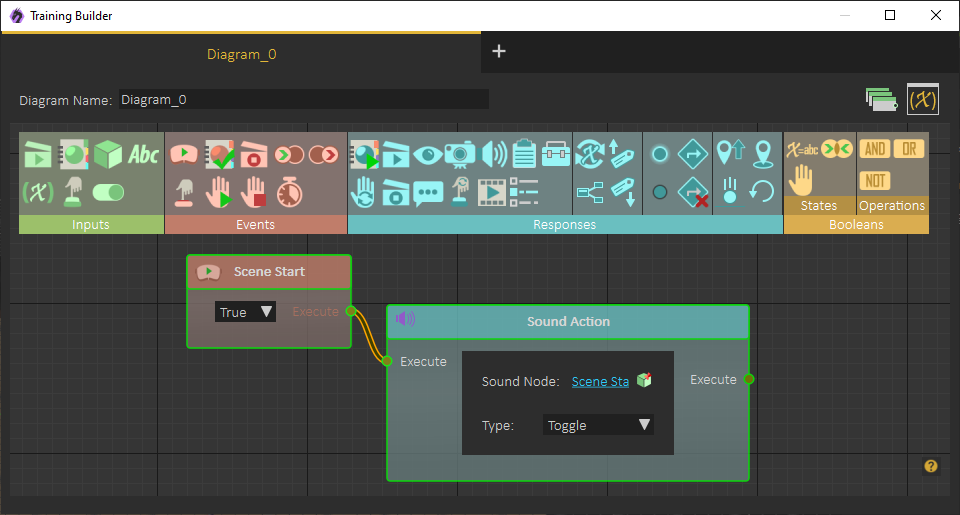 States are similar to events, and the current state can always be gotten from them. For example in the following image, Objects Overlap is shown, if the two objects Overlap you get OnTrue execution, as soon as they do not, you get OnFalse execution. The output Boolean value can be checked at any point to see if they are Overlapping on not. OnTrue or OnFlase are only fired when the state changes. 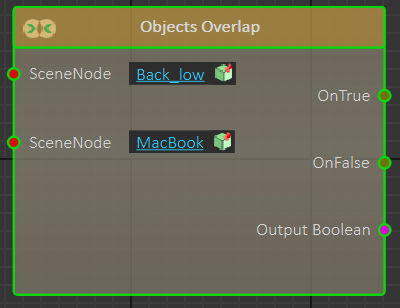 Opinations allow running Boolean operations on Boolean variables. Supported operations include And, Or and Not

Training Builder works great for describing  multiple step training scenarios. But what if the same behavior is repeated for a class of objects. For example if the user ends grabbing any of the tools in the training, the response should be for it to fall to the ground, this is when templates are used.

After clicking Create Template , a new Template diagram is added. A template diagrams is different from regular Training Builder diagram in its orange background marks, and in Template Scene Node block added in it. This block can not be deleted.

Template Scene Node block selects a group of Nodes based on query that can include one or more rows connected with And or Or, as shown in the following image. 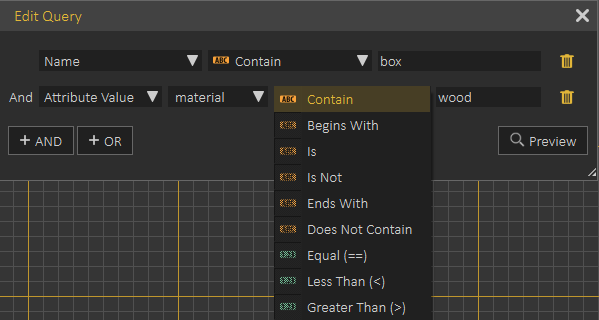 Logic connected to Templet Scene Node block will be applied to each Node that satisfies the selection query, for example in the previous image, each object having "box" in its name, and having "wood" in the value of its material attribute will be selected.

Copy part of a diagram

To repeat same logic for more than one object (in case templates did not do the job), part of the diagram can be copied. This is done by using the Left Mouse button to highlight the part of the diagram to copy, while the section is highlighted click CTRL + C to copy it, then CTRL + V to Paste. After that the Scene Node Object needs to be changed, and any block that needs update. 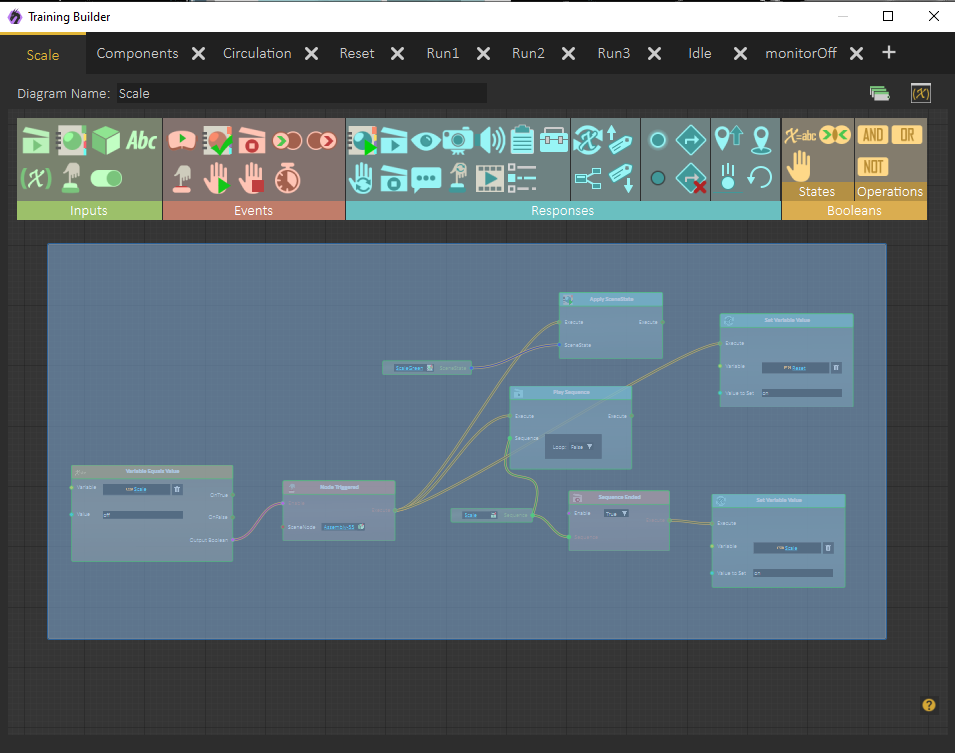 Drag/Drop of the scene

To add inputs like a Scene State or a Sequence, the following process is used

As shown in the following image 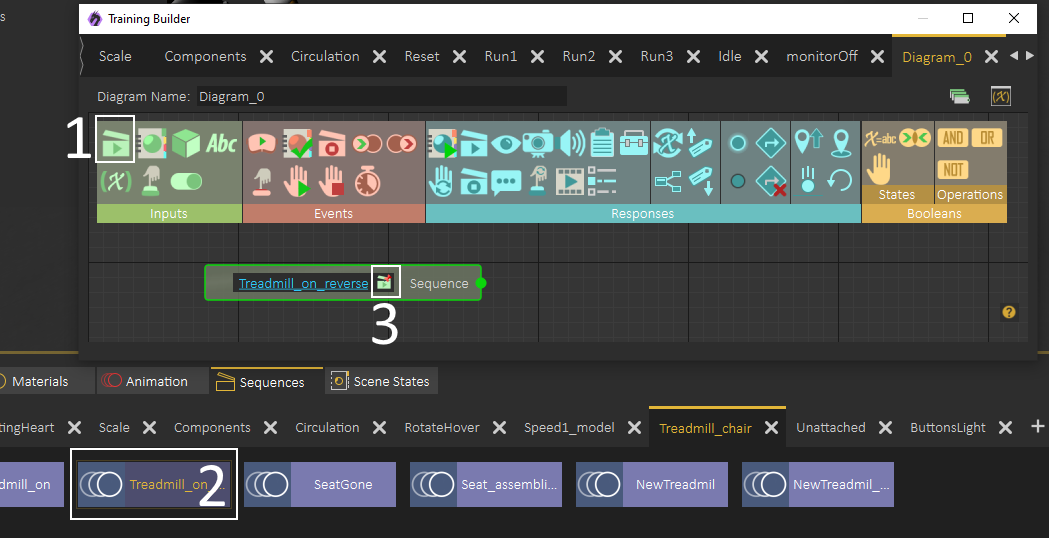 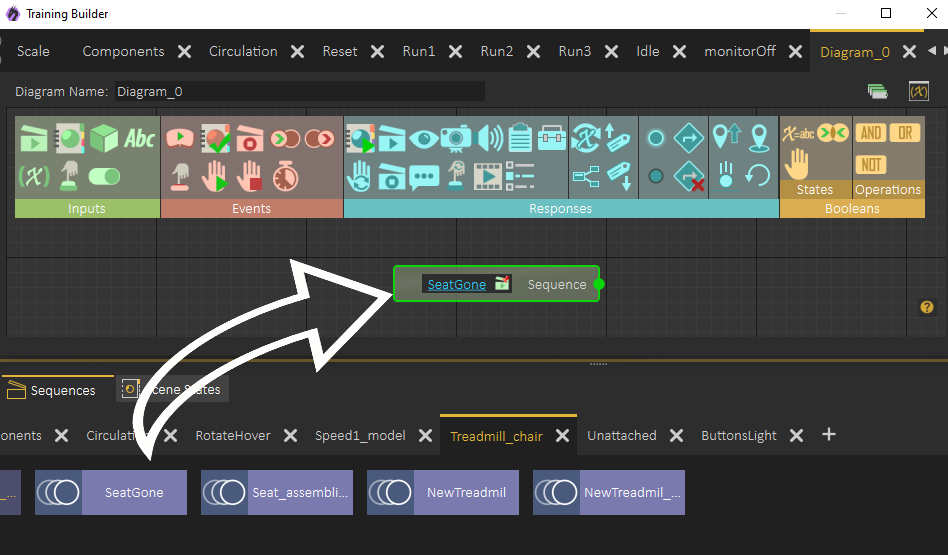 Clicking Right click in the training builder shows all toolbar elements, organized, so you can add any block without moving the mouse to the tool bar. 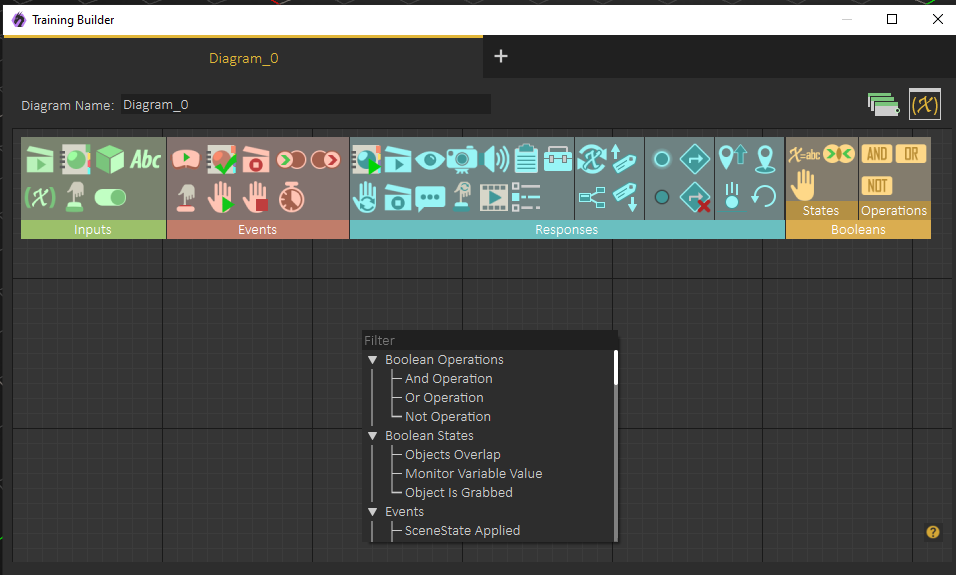 You can also click few characters in the filter to find an element quickly, as shown in the following image. 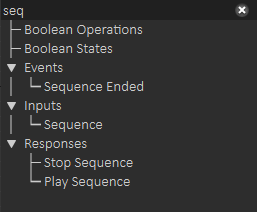 Attributes can be used with Training Builder in many ways:

It is a good idea to be familiar with attributes to create advanced VR experiences. To learn more about  attributes check the following tutorial