SimLab Composer is able to Import Rigid and flexible (Joints-based rigged) bodies animations as well as create animation for objects in the animation timeline through several tools.

To create Animation in Simlab Composer there are two methods that can be followed depending on the type of animation you want to create, you can either manually create the animation by transforming objects and capturing keyframes, or you can use object and camera tools to generate procedural animation such as wheel and path animation.

Watch this tutorial to learn more about animation in SimLab Composer

If the auto key button is toggled, all you need to do to animate an object is to move the current time indicator/slider to a frame other than 0, then move, rotate or scale the object (change its transformation) and 2 key frames will be created, a key frame at frame 0 to store its initial transformation, and the second key at the current time to store the new transfromation.

when playing the animation, an ainterpolation between the 2 keyframes will be automatically created and the object will transform from its initial state to the new state.

In this example, the car object was selected, and the current time slider was moved to frame 30, then the car was moved 2 meters, so 2 keyframes were created at frame 0 and frame 30 to denote the animation of the car

In addition to the standard transformation animation, there are other attributes or elements you can animate, each with a different keyframe type representing it in the timeline.

SimLab Composer has several tools that enable you to automatically create a procedural animation for an object or a camera without manually adjusting the time slider and changing the objects transformation.

These tools can be accessed from the Object animation and the Camera animations menu at the top of the timline panel.

When an object or a camera is selected and one of those tools is clicked, a dialogue will appear to set the parameters for the automatic animation that is to be generated.

This is an example of an animation dialogue that appears when the user selects the round table animation. In this dialogue, the user has to specify the start frame and the end frame, as well as the angle of rotation for the object or the camera.

The Round table animation will be represented as a single block instead of multiple keyframes, since it cannot be modified manually but rather through its attributes that appear in the panel to the right.

Keyframes interpolation (Ease in and Ease out)

Animation in SimLab Composer has a linear interpolation by default, which means that objects or attributes are animated at a constant speed througout the animation range, however, there is a way to change the interpolation of animation by srtting he keyframes interpolation to to an ease in or ease out interpolation. 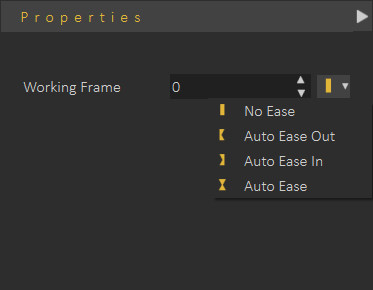 To change a keyframe interpolation, Select the key frame, and from the Properties panel to the right, open the interpolation drop down menu and select ease in, ease out, or auto ease. 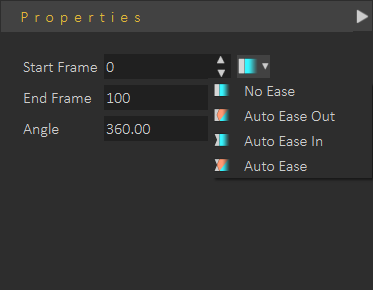 When choosing the Ease out interpolation, which should be applied at a frame at the beginning of the animation, the speed of the animation starts at 0 and then accelerates gruadually to get to a constant speed.

With the Ease in interpolation, which should be applied at frame at the end of an animation, the speed deccelerates towards 0 instead of abruptly changing to 0.

The Auto Ease interpolation combines both the Ease in and Ease out and is usually used for keyframes in the middle of an animation where the speed goes down as the current timeslider appraches that keyframe, and it picks up again as it leaves it.

To utilize Imported or created animation in VR you need to first store it as a component named "Animation Sequence", and then you can either attach it to a Play Sequence Response in the Training Builder, or use it as a Grabbable Sequence.

Created Animation Sequences can be found in the Sequences tab next to the Animation tab in the bottom panel in SimLab Composer.

from the Sequences tab you can : 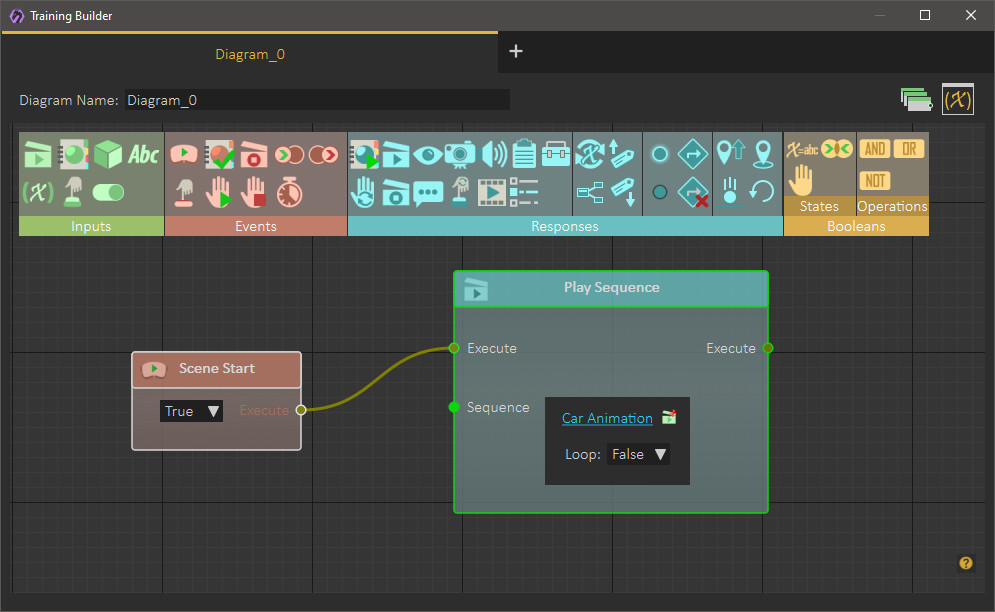 The Animation in VR will play once the Event attach to the response occurs.

Grabbable Sequences are a type of objects grabbing that constricts the movement of the grabbable object through an Animation Sequence.

A practical example would be to create a Lever's animation of it going up and down, then set it as a Grabbable Sequences where the user can grab the Lever arm but can only move it up and down in accordance with its created animation, unlike regular grabbing where the user can move and rotate the object in any direction.

To create a Grabbable Sequence from an animation Sequence follow these steps :